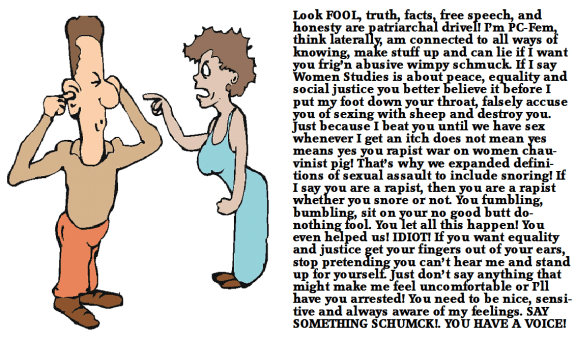 NCFM NOTE: Professor Finley wrote this article almost a decade ago. Unfortunately, the message is as valid today as it was then, though post-secondary institutions have during the past 10 years become even more politically correct implementing one misandric program after another to re-engineer young men, shape them into something they are not, albeit brainwash them and perhaps worse, disenfranchise them by defending false accusers. NCFM and its various voices, like Professor Finley, have been screaming warnings long before the decade past. Could it be people are starting to listen, even understand, perhaps get angry, if not incensed at the unfairness, injustice, and ideological drivel of all of it? Let’s hope so… Campus P.C. censorship is killing free speech in schools, at all levels, but the censors, gate guards, ideological operatives, defenders of their faith, are only concerned with voices of dissent from deplorable people who love and defend the boys and men in their lives. If there are males in your life that you care about and love make you voice heard too. We need all the voices we can get to get loud.

As implied in the original commentary by Peter Berkowitz (“Ethics 101,” editorial page, Oct. 8), but ignored by three letter writers (“Most Campuses Could Use Ethics Monitors,” Letters, Oct. 18), the real problem on campus is not “ethics” as traditionally taught in philosophy departments but rather the omnipresent indoctrination of P.C. ideology, the absence of free speech, and the censorship of opposing views.

The case of Larry Summers, the former president of Harvard, is the most instructive in this regard. Not only was this white male fired by the feminist and pro-feminist faculty for challenging feminist orthodoxy with behavior genetics science, but he was replaced by the former director of the Women’s Studies Program at the University of Pennsylvania. Further, he was blacklisted, denied the opportunity to speak to the University of California Board of Regents, and run out of town on a petition signed predominantly by female faculty at the University of California, Davis.

There’s a looming danger that colleges campuses will be dominated by P.C. ideology to the exclusion of other perspectives, the traditional heart and soul of a liberal arts education and free academic inquiry. Therefore, the danger of adding “ethics monitors” to campuses is that they could well turn out to be P.C. police.