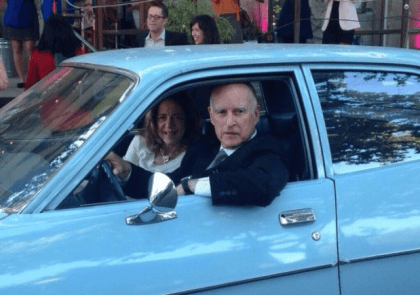 Governor Moonbeam Flip-Flops on Due Process

I and every other man in America thanks Governor Jerry Brown for his recent veto of SB169 which would have codified into California law former President Obama’s notorious “dear colleague” letter and guidance which explicitly deprives men of all due process rights on college and university campuses — among multiple other faults.  The Wall Street Journal heralded Brown’s veto with an editorial titled “Jerry Brown’s Title IX Veto: California’s Governor stands up for due process on campus” [https://www.wsj.com/articles/jerry-browns-title-ix-veto-1508280834].

Ah, had Governor Brown not but had the same prescience in 2014 when he tragically signed SB967 which made California the first state in the nation to codify into law “Yes Means Yes” also known as Affirmative Consent – which remains California Law to this day.

Perhaps it would be in the best interests of the occupants of and candidates for higher office to visit this website more often. Had Governor Brown taken to heart our positions on the National Coalition for Men website in 2014 (see below) he could have avoided doing no harm to the sons and families of California and the necessity and embarrassment of having to flip-flop on due process.

The Denial of Due Process May Bankrupt Universities

With now literally hundreds of editorials and op-eds taking positions both pro and con on California’s SB 967 – as well as the broader issue of “affirmative consent” for sexual relations — it is virtually certain that the California legislature will pass and send to Governor Brown’s desk SB 967 in the coming week. The bill is titled: “Student safety: sexual assault.”

Writing as a faculty member of more than four decades in four universities, it is tragically clear that this campus rape crusade bill presumes the veracity of accusers (a.k.a. “survivors”) and likewise presumes the guilt of accused (virtually all men).  This is nice for the accusers – both false accusers as well as true accusers — but what about the due process rights of the accused?

Critically, and the reason why men are winning very substantial lawsuits against universities, is that the fact that the current campus rape crusade explicitly denies men fundamental due process rights such as the right to a lawyer, the right to cross-examine, and the right to evidentiary standards (clear and convincing evidence) appropriate to the consequences for the accused. Simultaneously, the campus rape crusade provides every conceivable aid and assistance to the accusers to prosecute the accused. This would be difficult to describe as “fair.”

If the ideologically tainted advocates in the administration, in Congress, and on campus continue this crusade against male students, it is possible that colleges and universities – as well as taxpayers — will be spending more money on administering these laws and on lawsuit pay-outs than on instruction.  Further, and as more and more men win due process denial lawsuits (this is a slam dunk because the denial of due process for the accused explicitly is written into the laws) the rate of such lawsuits will grow exponentially.

The solutions are to drop the fraudulent “1 in 5″ campus rape claims of the administration, return to the definition of “Forcible Rape” (rather than “affirmative consent”) for sexual assault, and prosecute crimes that are ranked second only to murder in the criminal justice system which is trained and designed to investigate and prosecute them.

In deciding whether to sign or veto SB 967, the guiding principle should be that which is engraved above the entrance to the U.S. Supreme Court: “Equal Justice Under Law.”

Governor Brown, I urge you to veto SB 967 and send it back to the legislature with the request that any future laws regarding sexual misconduct provide equal protection and full due process to both California’s sons and daughters.

Anything less would be a dereliction of duty.

Gov. Moonbeam Flip-Flops on Due Process