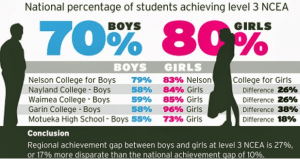 I hope that the incoming administration of President-elect Donald Trump will act immediately to restore equal justice, equal rights and equal opportunity to those whom the Obama administration has denied all these things — boys, men and fathers. An excellent starting point would be the Department of Education, which will be under his direct administrative control (“Donald Trump and Bill Gates find common ground,” Web, Dec. 28).

There are numerous reasons why this crisis has emerged, but many can be laid at the feet of radical feminism and its chief social control mechanism: political correctness. One of the most egregious causes of this educational crisis emanated from President Obama’s Office of Civil Rights in his Department of Education.

In yet another false narrative, Mr. Obama declared on national television that there was a rape crisis on college campuses and that to solve it, college men accused of sexual assault must be denied due process, tried in campus kangaroo courts and have their futures ruined. If colleges and universities did not comply, they were threatened with the loss of federal funding.

Equal justice under law (the words inscribed above the entrance to the U.S. Supreme Court) can be restored by rescinding Mr. Obama’s policy and changing personnel. I urge the Trump administration to reverse Mr. Obama’s course and provide encouragement, support and funds to give boys and men an equal opportunity to achieve an education, from kindergarten through advanced degrees.

Also, in my view, what all current employees of the Office of Civil Rights in the Department of Education need to hear on Jan. 20 is this: “You’re fired!”

The letter above was published in The Washington Times on Tuesday January 3, 2017.