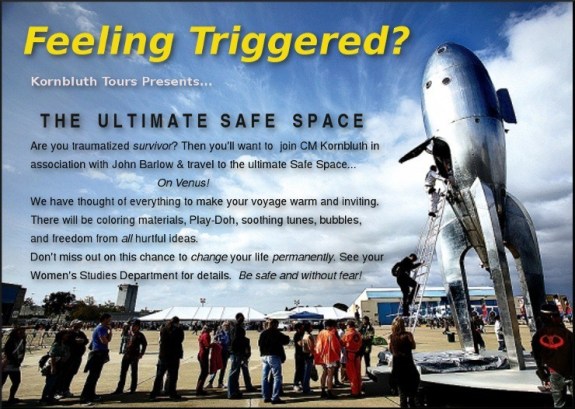 From The Tyranny of Trigger Words and College Safe Spaces written by Richard Ebeling June 9, 2015

Safe Spaces, or Havens of Misandry?

A number of schools are now offering “safe spaces” to combat “toxic masculinity.”  But are those spaces really “safe spaces,” or are they just places to promote and increase feminist misandry?

One of the strongest refutations to the feminist fraud that “gender based violence” is an exclusive, or overwhelmingly, male problem is the rate of kids killed by neglect and abuse:

“According to the U.S. Dept. of Health and Human Services and DOJ statistics, more kids are killed by neglect and abuse in a year (1,460 in 2005), than all the female intimate partner homicides in a year (1,181 in 2005). And biological mothers are the single largest group of kid killers. They have a rate twice that of fathers…”  http://i61.photobucket.com/albums/h53/MRA_06/ChildFatalities2005Poster.jpg

Further consider all the feminist fraud that is committed in the domestic violence industry, where statistics show that the number of men victimized by domestic violence has been grossly under reported and under addressed.  In as much as the rate of victimization is close to 50/50, the contention that “gender based violence” is an overwhelmingly male problem becomes even more ludicrous.  http://web.csulb.edu/~mfiebert/assault.htm

Further consider the feminist witch-hunting of innocent males through false accusations/false arrests/wrongful convictions.   Those atrocities committed against innocent males in the areas of falsely alleged: domestic violence, campus sexual assault (see ncfmcarolinas.com), and military sexual assault (see saveourheroesproject.com) makes it very hard not to conclude that feminism is and has been a hate movement operating in plain sight under color of law.

Being pummeled with the misandrist feminist mantra/agenda that “gender based violence” is overwhelmingly a male problem makes us all witnesses to one of the greatest evils in the history of late 20th century and early 21st century civilization.  Let us not be silent witnesses.

Safe Spaces, or Havens of Misandry