NCFM Member Alan Lee Millard, Chivalry is a Flaw from Within that has Given Rise to Feminism, Part 2 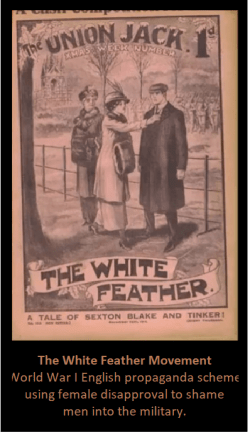 Chivalry is a Flaw from Within that has Given Rise to Feminism, Part 2

There have now been several generations whose lives have been wasted due to what allowed feminism to develop and help destroy society. The reason I say what allowed is that feminism would have never occurred had it not been for chivalry and favoring women over men. Here I present part two of Chivalry is a Flaw from Within that has Given Rise to Feminism:

The television series Naked and Afraid is quite ridiculous and not proper in many ways, including cruelly defying the male’s sex-drive, with an adult male being exposed to, and naked with, a nude adult female, given she’s attractive, although in some cases it appears to be honored by some of the female participants— just as a team member and real mate would be in the wild. (This serves as an experiment not otherwise allowed to be conducted on humans in the laboratory or under the auspices of science.) But one thing it does is expose basic human male/female dynamics. Humans in nature not only must recognize but completely utilize their unique male/female innate characteristics for their best chance of survival. And that matches to our basic male/female self-worth and societal equilibrium. And this human dynamic proves to be essential in the series, with what it calls a survival rating assessment assigned to each participant, predominantly the highest attributed to men, although alone men have a difficult time surviving too, almost as much as women do, which reveals necessary mutual cooperation and consideration for best male/female survival. When men and women needed each other and depended on each other more, they were more committed, bound, and dedicated to each other. This created strong bonds between them that became evident as a team–a tendency that instilled resiliency and enduring, successful relationships between men and women.

Now that men’s resources have been split with women, the whole human dynamic construct has been knocked out of kilter with basic human dynamics not honored or consequences even considered by the forced changes–a massive sociological human experiment without the participants’ approval. The new arrangement was not time-tested, but enacted in complete defiance of who we really are. No other species can continue to exist that has its basic biogenetic constitution so dramatically altered. The biologically-based behavior exhibited also fails to match the extreme change as women in their mate selection prefer men who have the resources women have now tapped. The past arrangement was matched to best support human life—one career, one family. And that arrangement originated from biology, even prior to humans completely separating from apes. An incongruity in this delicate balance alters the outcome significantly, producing, still yet to be seen, negative consequences to our own species. This human experiment, despite being so alien and offensive to a well-established species and its social order, could only occur in the first-place due to a preference allotted to women who, being a privileged segment of society, allowed an avenue for its delivery. But the small-minded will continue to be socially influenced, denying that basic inner gut feeling (biologic construct) where the truth lies.

No coercive pressures were placed on women to alter their behavior to match the forced change and applied to their equal social responsibilities in the mating/dating scene. Hypocritically, many women still expect men to exhibit the same behavior and role of the past. However, women express the same assertiveness and initiative needed in the mating process when making female friends, and as school teachers, parents, waitresses, prostitutes, and in sales, so no excuse exists for women to not do their equal part initiating contact with men in the mating process. Only a better-than-you female mindset prevents the existence of men’s equal status to women combined with male hatred cultivated by feminism which especially attacks the male’s sexuality and participation in the mating process, with many recent laws made to prove it. What is often used to determine a violation of a female by a male is her violation of him.

It’s also not women’s but men’s sexuality that is exploited by women as in strip clubs, through porn, prostitution, officially and unofficially by women expecting men to buy them drinks, dinner, and pay their way in exchange for sex or, pathetically, a potential chance to have sex. If not, all these avenues to fulfill men’s sexual needs would be free and legal. Women do all this yet claim men are exploiting women when it is women who commonly exploit men and their sexuality/deprivation for money or some other female benefit that exists at men’s expense? (And with feminism’s influence law enforcement has recently been targeting men and holding men more accountable than the women involved—the very ones who have made the sex act illegal by them charging the men!) Men pay women and women charge men, in one way or another, for sex.

Feminists can’t handle the truth so they get personal, and that somehow suffices for their lack of an adequate or rational thinking process. But this irrational and irresponsible approach produces nothing, failing to address the matter at hand. And this somehow allows feminists to get their way, with their opposition (many men and some women too) fearing extreme humiliation and their personal attacks. Women, especially feminists, without using logic, but intimidation, have used these bullying tactics (combined with an honored superiority complex) to get their way for decades. Prior, women, from their same pedestal status, used such tactics to shame men into going to war, despite their own failure to accept any life-threatening obligations (e.g. the White Feather effort during WWI) and supporting what were considered many other social obligations to best serve women (e.g. support provided to cancer research only for women and Domestic Violence prevention only for women are modern-day examples).

Besides the increased lack of equal justice, a societal mismatch now exists applied to human dynamics. In one form or another the sex for money trade-off, which I coined in my first book, Equality: A Man’s Claim, is a basic principle that applies to all behavioral interactions between men and women. It has a foundation in our biology relating to our matching behavior, preferences, and mate selection reflected in the “oldest profession” and the value attributed to men and women in the slave trade.

There are deviations and exceptions of course, but the prior arrangement (more specified sex roles) existing between men and women, and the rules that applied, are time-tested through an evolutionary human process, beginning within the animal kingdom but advancing with further human development for thousands of years. In complement to other animal species and in contrast to feminism, the most advanced species has the most cooperative and complementary sex roles attributing to humanity’s success. But how is it possible that what attributes to a species’ success is suddenly abandoned? How could something so foreign be so readily embraced by an advanced society as ours? Through chivalry—a flaw from within.

Alan Lee Millard is the author of Equality: A Man’s Claim, Land, People, Politics, and Ignorance, and, his latest, A Flaw From Within.

Chivalry is a Flaw from Within that has Given Rise to Feminism, Part 2