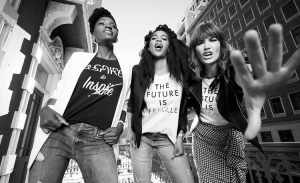 Complaint about Foschini’s disgraceful “THE FUTURE IS FEMALE” advertising

[NOTE: This letter will be published online and will also been copied to other recipients; including certain competitors, magazine and media outlets. While the complaint itself might not concern your establishment, the underlying message is nevertheless extremely important. Brands like Foschini have the power to touch the lives of many people and should never be used to promote divisive or harmful ideologies. Also attached with this email is a comprehensively researched and fact-based article by the same author intended to serve as a supplement to this letter as well as a shocking eye-opener]

Has misandry become so entrenched in society that it has now become fashionable to promote the extermination of men and boys in the name of profiteering?

While perusing through the aisles of The Grove Mall in Equestria, Pretoria on Saturday afternoon the 29th of July 2017; I walked past the Foschini store on the upper level and came across one of the most incredulous, blood-curdling and sickening exhibits of advertising mishaps I have ever come across in retrievable memory.

After seeing your “THE FUTURE IS FEMALE – CREATE IT” posters and mannequin T-shirts prominently displayed at the front of your store, I immediately asked to see the store manager. Incidentally, it was a humble and polite young male employee who showed the most professionalism and willingness to help me and he phoned the store manager on my behalf. When the store manager was eventually located, I questioned her about the posters and T-shirts and gave her a brief explanation of the sinister ideology and history underpinning the slogan “The future is female”.  The impression I got from her evasive response was that the posters and T-shirts form part of Foschini’s celebration of women’s month in South Africa (August 2017).

Almost a month after speaking to Gove Mall Foschini’s store manager, this militant and elitist female advertising is still being brandished at your stores and on your website. Why should it take a letter like this to persuade your senior management/group executive board to take immediate remedial action, or better still; to prevent such reprehensible advertising from being published in the first place? If basic moral decency and common sense escapes you, shall I enlighten you about where the slogan “the future is female” comes from, Foschini?
“The proportion of men must be reduced to and maintained at approximately 10% of the human race” – Sally Miller Gearhart (Feminist, Science Fiction writer, Political Activist, ‘The Future – If there is one – Is Female’, 1981)

At least ideological rattlesnakes like Sally Miller Gearhart were willing to maintain the male populace at 10%. Plainly, Foschini wants that figure to be reduced to 0% while cashing in on the situation in transit.

Decades of tough living, investigative research and human rights activism has made me very familiar with the ubiquitous and relentless attack on men and boys in society; hallmarked in key areas such as wholesale male-bashing in entertainment and media, victimization in family and divorce courts, anti-male bias in criminal sentencing, forced military conscription across most of human history, discrimination in affirmative programs and social services, socio-political hate speech, male genital mutilation under the auspices of deceitful and fraudulent medical science, an overwhelmingly male suicide rate, an overwhelmingly male workplace fatality rate, male-dominated homelessness/unemployment rates, male-dominated homicide and violent crime victim rates and contemptuous disregard for male suffering in general. And yes, males also experience discrimination in the workplace, contrary to popular belief.

However, it is not often I come across a major retail outlet which brazenly promotes the gendercide of roughly half of humanity without any ambiguity, pretences or subtlety.

Notwithstanding its perniciously harmful Feminist origins, the slogan “THE FUTURE IS FEMALE – CREATE IT” leaves absolutely no room for misinterpretation. If that slogan is to have any impetus or credibility whatsoever, the male gender must be eliminated completely and without exception. This does not require an advanced degree in English to understand. Apparently, Foschini is not willing to do the dirty work themselves and instead appear to be calling upon some non-descript other party (presumably their customers) to “create” this female future instead.

What an EVIL and spectacularly deluded message to be giving women and girls shopping at your retail outlets all over the country and beyond! (Aside from your acquisitions in the UK, I believe that Reuters mentioned not so long ago that your group was planning on tripling the number of its stores across the rest of Africa within a five-year period?)

As a matter of interest, how exactly do you intend to “create” this male-free future, aside from using your monolithic retail chain as a misandry generating propaganda machine? Are you hoping that suicide, work place deaths, military deaths, ailing health, etc. will eventually wipe them out, or are you planning to take a more active role in either killing them or genetically breeding them out, the latter of which is supported by sinister organizations like Planned Parenthood? (An organization founded by Margeret Sanger; author of “women and the new race”. She was also an avid supporter of Adolf Hitler’s eugenics program).

If you did not really mean for your marketing slogan to say what it literally does say, and instead intended to say that females deserve special focus in the future because males are supposedly “privileged”; then you can also add ignorance and incompetence to your list of accolades.

Even the photography and special effects used in this case are foolishly ill-conceived.  For one, you endeavour to portray the imagery of a conceptually “bright” future (without males) and yet you use a dull, dreary black-and-white colour scheme. For another, you use a low camera angle focus on three female models to create the visual impression of female superiority, but instead of those female models coming across as loving, strong, intelligent and decent human beings, they come across as a bunch of belligerent, shallow and narcissistic brats. (One of them appears to be pawing away a photographer out of a diva-like sense of stardom and self-aggrandizement.)

On the subject of creating futures, are you aware of the fact that despite their higher mortality rates, men are still inventing and building just about everything you use today, including your roads, houses, hospitals, schools, vehicles, electrical appliances, mobile phones and computers? Society (notably women) will tend to treat men as worthless unless they are socially dominant, top-achieving money-making disposable beasts of burden, and yet Feminist ideologues will bemoan a male majority in top positions all while conveniently overlooking the fact that there is an extreme over-representation of males in the vastly larger range of dirty, dangerous and low paying jobs which keep the world running.

Do you really think that males are “privileged”, Foschini? Is that why males have been dying in countless millions on the job or in wars not even started by them throughout all recorded history? Is that why most males who do not reach the top positions in society are demonstrably overlooked in dating and romance by the female gender? Is that why “save the women and children first!” has been shouted out countless times on many sinking ships and within many burning buildings? Is that why men and even boys have died on countless battles to defend your homes, your countries and your way of life?

I was so disgusted with Foschini that on South Africa’s National Woman’s Day (9 August 2017 – over and above the whole month of August also dedicated to women), I purposely donned a pair of camos and went to go and watch the movie DUNKIRK (Christopher Nolan, 2017) despite the murderous, toilet-bowl looks I got from a few female mall-goers. This movie is far detached from the ideologically tainted anti-male filth that comes out of Hollywood, and I would highly recommend that all your staff at Foschini see the film. They might walk away with a new-found sense of appreciation and humility for what men have done in history for the benefit and protection of women, children, hearth and home. Their sacrifices made it possible for you to have the freedom and liberty to trash men today. I can’t help but think that their sacrifice was for nothing, and that their real enemy was not on the front line but on the home front.

After examining the PAIA (Promotion of Access to Information Act) for The Foschini Group Limited (“Foschini Retail Group” – Registration number 1937/009504/06), I happened to notice that not only does The Foschini Group’s CEO happen to be male (Alexander Douglas Murray) but also that 16 out of the 19 group executives listed are MALE (only three females!). I find this fascinating, because according to decades of established Feminist doctrine, having men in charge (“patriarchy”) automatically equates to the “oppression” of women. How did it come to pass that an organization with mostly men at the top came to be so tolerant of such impetuous and candid anti-male marketing? What a macabre ironic, paradoxical and all-too-familiar turn of events it would be if the proverbial “man at the top” (of the Foschini Retail Group) is the one who takes the biggest fall for such an immoral and magnanimous marketing brain-fart. Tellingly, anti-male ideologies seem to be backed by the very same “patriarchy” which Feminism claims to be fighting against.

Now listen carefully, Foschini. If you are adamant about creating a future without males, then you are going to have to start preparing women for the REAL world which most of the world’s men live in. Therefore, your store will need to stock a lot more than just designer clothing, powders, lipstick, creams and other forms of fashion paraphernalia. Presently, a woman who shops at Foschini is about as well equipped for a future without men as an ice-cream cone in the Sahara Desert.

I trust that this baptism of literary fire has spring-cleaned your souls and taught you the value of promoting a future in which men and women walk hand-in-hand, shoulder-to-shoulder and heart-to-heart in mutual love, respect and appreciation of their uniqueness. Hopefully, you will refrain from using the passions and emotions of women as leverage to promote poisonous ideas for your own benefit.

Complaint about Foschini’s disgraceful “THE FUTURE IS FEMALE” advertising