NCFM Member Kit Martin, Betrayed, How America’s veterans are now trapped and abused by their own military 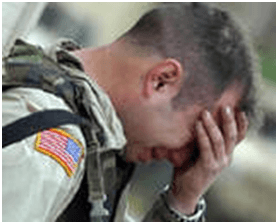 How America’s veterans are now trapped and abused by their own military.

As we put the American flags away and clean up the BBQs after Veterans Day, inwardly content at our show of patriotism, many of us are unaware of the tens of thousands of veterans now trapped in a cycle of domestic abuse and fear.  Abuse from spouses or lovers that have faced one too many deployments alone and have “moved on,” and fear that their commanders will throw them under the bus with the new initiatives of the Obama administration — downsizing and eliminating the so-called sexual assault “epidemic.”  This has created a no-win situation for our veterans and service members as they face betrayal and alienation at every turn from those they once trusted.

It’s not easy returning from a war zone.  Even if you didn’t personally engage in combat, it’s still all around you — the constant fear of surprise attacks and the stress of an unrelenting work cycle, often consisting of 12-hour shifts, seven days a week, for a year or longer.  On top of that, there are no stress relievers of family time, social drinking, or sexual intimacy.

Deployments, even non-combat ones, are pressure cookers, with the stress increasing for veterans and their families with each new deployment.  Besides the immediate personal fear, there is the fear for one’s family.  Are they healthy? Are they safe? Have they forgotten me? And then, of course, there is that nagging fear about whether your significant other is being faithful or is finding their own stress relief in the arms of another.  Despite the stress service members endure, many recognize deployments are often harder on spouses than they are on the veterans.  Spouses are the ones left alone with children and the constant unknown of what tomorrow may bring, often in foreign countries where they don’t speak the language or have any family.

When the deployment finally ends, these issues don’t just suddenly go away.  Often, service members and their families will be told they will soon be deploying again, even before their current deployment ends.  This means that 9 to 12 months of “family re-integration time” will actually be spent in the field training and meeting hundreds of pre-deployment requirements.  In today’s military that now includes the additional requirements of sexual assault indoctrination, homosexual and transgender sensitivity, and even condom training (for the sex they can’t have).

Veterans trying to reconnect with their families often realize it will never happen.  Their young children don’t remember them, and the older ones have changed, as has everyone else.  At work, the veteran’s unit will soon go through a huge personnel turnover, and the people they trusted with their lives, the few who can actually relate to them and what they have been through, are also transferred.   Most of the old traditions that created esprit de corps, unit bonding, and the ‘warrior spirit’ have also been scrapped for expediency and political correctness.  This leaves our veterans with strangers on all sides and no sense of family at home or at work.  Worst of all, veterans often have to deal with the painful discovery that they have also been replaced in their bedrooms.  This can lead to even further alienation and stress as families deal with heated arguments over who cheated on whom.

So, who does the veteran turn to?  Their most intimate partner may be having an affair, often very publicly.  Their children don’t know them anymore, and maybe have been taken away, (along with their cars, possessions, and money).   As already mentioned their best friends have probably been reassigned as well and their former is leaders.  Their parents, siblings and extended families haven’t seen them for some time and are probably not close, possibly on another continent.  This is why many veterans often feel even more isolated when they get home than they did when they were deployed.  They will soon discover they’re more vulnerable too, as they face a new war, “The Secret War.”

As the dust settles on their past relationships and they try to cope with their new life and the loss of their children, they face a new threat.  A threat from the very organization for which they were willing to risk their lives.  As a result of political pressure, Defense Department leaders seem to have dedicated the last six years to a witch-hunt against veterans and service members.  This has been cloaked in the crusade to eradicate a non-existent, but politically-expedient “epidemic” of sexual assault.  This is part of the same campaign that is driving liberal agendas on college campuses and forcing the DoD to spend tax payer dollars on transgender integration and sex change operations.

As a result of this campaign, due process and service member rights have been sacrificed in order to streamline the conviction process and appease politicians.  Concessions have been made which have virtually eviscerate constitutional rights and due process protections.  The list of concessions includes changes to the Uniform Code of Military Justice, the creation of “special victim” programs and prosecutors, and a generous transitional compensation package for alleged victims.  Even the definitions of sexual assault have been changed.  Together, these actions have resulted in military veterans facing a “perfect storm” when it comes to false allegations.

General Colin Powell defined leadership as “problem solving,” but todays military leaders are sacrificing their own in order to protect and sometimes further their own careers.

“The day the soldiers stop bringing you their problems is the day you stopped leading them. They have either lost confidence that you can help them or concluded that you do not care. Either case is a failure of leadership.” ― Colin Powell

The current over-reaction by military leaders to save their own power has also put a huge bullseye with dollar signs on the back of every service member.  Not only can those that now hate him or her get revenge, false accusers can get paid hundreds of thousands of tax payer dollars in “victims compensation” while they do it.  This has left thousands of veterans “trapped” in abusive relationships, the very thing the military is supposedly trying to eliminate.  If they try to separate or get a divorce their spouse or former lover can destroy them with a simple phone call.   How many service members are ‘held hostage’ in their own homes in relationships they feel they can’t leave because they are being blackmailed by a former lover?

Other veterans have moved on and now their new families have to deal with the military pulling the rug out from under their lives as former partners, or even mere acquaintances, make accusations for monetary rewards.  These accusations are often instigated by military prosecutors and investigators.  Either way, once a service member has been accused, the full weight of the U.S. government and all of its ample resources will be brought to bear against them.  Worse yet for many, their positions, reputation, rank and honor will be stripped from them just as President Obama dictated.

“The bottom line is this; I have no tolerance for this, I expect consequences…they got to be held accountable, prosecuted, stripped of their positions, court martialed, fired, dishonorably discharge. Period.”

Everything service members have worked for, the very essence of who they are, will be very publicly and irrefutably taken from them.  Faced with this knowledge of a no-win situation and the ultimate betrayal, many veterans end up wishing they had died “a hero’s death” in combat.  Many ultimately take their own lives to escape decades alone in a cold prison cell-Death Before Dishonor.  Statistically this is almost one veteran suicide every hour of every day!  Think about that when you check the time or watch an hour-long program.

This war against veterans has been easy to hide since less than one half of one percent of Americans have any real affiliation with the military, and consequently no real understanding of what is happening.  When it is finally revealed that thousands of America’s veterans have been railroaded into prison using millions of tax payer dollars, the American public will be furious.   This is not just victimizing veterans, but often their families and extended families too.  Families that have sacrificed so much to protect your freedom.  This is as bad, in some ways far worse, than the VA health care scandal.

If you would like to learn more about this situation, please read “The Secret War” and, afterward, contact your political representatives. Tell them you want the unjust persecution of our veterans to end.  Don’t just tell our veterans “Thank you for your service”, show them you really care, DO SOMETHING!

Please support the non-profit Save Our Heroes.  http://www.saveourheroesproject.com/

How America’s veterans are now trapped and abused by their own military.