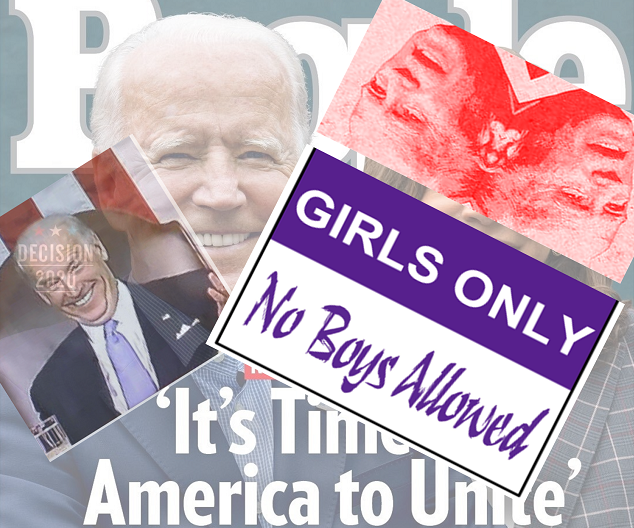 Every new president vows to heal the very divide his party and opponents have spent the last year and billions of dollars magnifying. Invariably, the plea translates into “unify by agreeing with me.”

One of President Joe Biden‘s first policies appeared to bridge the gender divide by creating a White House Gender Policy Council. As someone who served on the Board of the National Organization for Women in New York City, I have seen enormous progress in women’s issues, and a need for more.

Simultaneously, for a half century, millions of parents of boys and I have witnessed an ever-growing boy crisis. We see it hurting not only boys, but the fathers they may become, and our daughters who seek future young men worthy of their love.

By creating a council for “gender policy” rather than a council for “women,” Biden seemed to be heeding the warning embodied in Betty Friedan’s The Second Stage: The liberation of women will plateau if attention to men’s issues does not follow.

Politically, this is understandable: Men dominate corporate and political power structures. That’s a valid half of the gender picture. Here is the missing half: The U.S. currently has seven federal offices of women’s health, and none on men’s health.

The neglect of men’s health has contributed to the decreasing life expectancy of males for the past three years. Boys and men die sooner of nine out of the 10 leading causes of death. Obesity is a bigger problem among boys. Boys are twice as likely to die from opioid overdose, and to be street homeless or living in their parents’ basement. They are more likely to be addicted to video games, pornography and alcohol. More alarming, boys commit suicide at four times the rate of girls.

Our nation’s boy crisis resides where dads do not reside. A starter solution? If a parents’ relationship ends, being certain the children’s relationship with both parents continues.

Boys with no constructive male role model—who go from a mom-only home to a female-dominated elementary school—are vulnerable to destructive role models, from gang leaders to drug dealers, which is why abusive priests target fatherless boys.

In education, the curtailing of recess, physical activities and vocational education reflect an insensitivity to the way boys learn. The culture of “The Future is Female” doesn’t inspire boys for their future. The result? Boys now do worse than girls in all academic subjects, and especially in reading and writing, the two biggest predictors of success or failure.

The high school graduation rate for boys barely exceeds that for economically disadvantaged students (82 percent versus 80 percent) which should make boys a demographic Biden would advocate. And since Biden cares about unemployment, it is relevant that young male high school dropouts had more than a 20 percent unemployment rate even before COVID.

Part of the Gender Council’s stated mission is racial injustice. For females only. Yet it is Black males who are 24 times more likely than Black females to be shot by police. Victims of racial profiling, such as DWB (Driving While Black) are really DWBM (Driving While Black Male). Black prisoners, unemployed and homeless are overwhelmingly male. When it comes to racial injustice, the forgotten half of “Black male” is “male.”

The solution? Since the Moynihan Report in 1965, we have known that inner city crime emanated predominantly from the 25 percent of Black males growing up in dad-deprived homes. That percentage is now in excess of 70 percent.

Our prisoners, our ISIS recruits and our mass shooters overwhelmingly have two things in common: they are male, and they are deprived of both dads and positive male role models.

As a devoted dad and family man, Biden is in a strong position to both articulate how dad deprivation hurts, and how boys who hurt us (mass shooters and criminals) are boys who are also hurt.

For Biden to be our healer and unifier we need his courageous leadership for an evolutionary shift. We need neither a women’s movement blaming men; nor a men’s movement blaming women. We need a gender liberation movement, freeing both sexes from the rigid roles of the past toward more flexible roles for our future.

We are all in the same family boat. When only one sex wins, both sexes lose. Or, in Biden’s words, “Without unity, there is no peace.”

Let’s start with liberal inclusiveness: including boys, their dads and men in a Gender Policy Council. The path to unity and peace is caring about everybody.

Warren Farrell, Ph.D., is the co-author (with John Gray) of The Boy Crisis. He was the only man elected three times to the Board of the National Organization for Women in NYC. He was chosen by The Financial Times of London as one of the world’s top 100 Thought Leaders. He lives virtually at www.warrenfarrell.com.