NCFM Quoted in Stars and Stripes, Will women have to register for the draft? Republicans say no 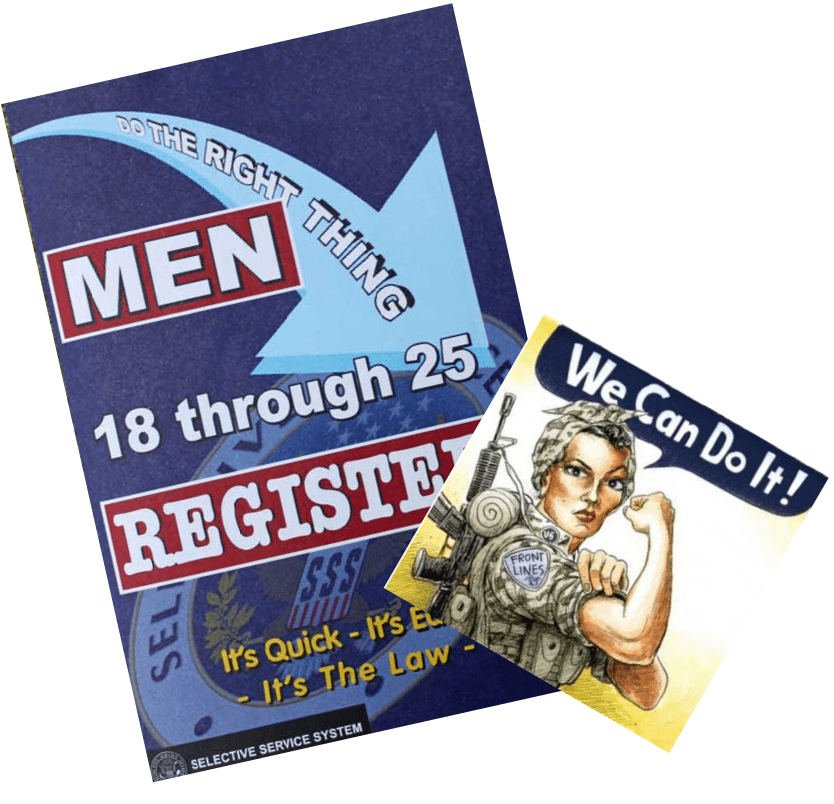 Will women have to register for the draft? Republicans say no

Marine Corps Staff Sgt. Kayla Cerda, a drill Instructor, commands a recruit to run in place during a function in Van Nuys, Calif., on March 12, 2016. House and Senate lawmakers are deeply divided over requiring women between 18-25 years old to register with Selective Service.

WASHINGTON (Tribune News Service) — It’s been well over a year since the Pentagon announced its historic decision to open up all combat jobs in the military to women, but Congress is still debating over whether women should register for the draft.

House Republicans are blocking every congressional effort to force women to join men in signing up when they turn 18.

Last year, the House and Senate both approved plans to draft women if necessary, but Republicans later used a procedural maneuver to scrap them.

Lawmakers did, however, create an independent, 11-member National Commission on Military, National and Public Service to study, among other things, extending the draft to include women.

The commission, created when the law was signed by President Barack Obama in December 2016, is just getting off the ground. President Donald Trump sent a memo in April outlining his “principles for reform,” and the commission could take more than two years to produce a final report.

In the memo, Trump said the commission should closely examine “the feasibility and advisability of modifying the Selective Service process to leverage individuals with critical skills for which the nation has a need without regard to age or sex.”

Chances are legislative efforts this year will go nowhere.

The House is expected to consider defense legislation this month. But when writing the bill in June, the House Armed Services Committee rejected a proposal from Rep. Jackie Speier, D-Calif., to require women to register with the Selective Service System, the agency that keeps a list of all draft-eligible men. Almost all men ages 18 through 25, including immigrants who aren’t citizens, are required to register. The last draft, during the Vietnam War, ended in January 1973.

According to a 2015 report from the Department of Defense, women make up 15.5 percent of active-duty personnel. Women have the highest representation in the Air Force, 19.1 percent, and the lowest in the Marine Corps, 7.7 percent.

“We’re trying to establish greater equality in every respect in this country and with that equality comes rights and responsibilities,” Speier said in an interview.

Speier’s bid to include women in any draft system failed in the committee on a largely party-line vote. One Republican, Rep. Martha McSally of Arizona, and 26 Democrats went along with Speier. Thirty-three other committee Republicans voted no.

McSally, a retired Air Force colonel, was the first female pilot to fly in combat and the first woman to command a fighter squadron. A spokesperson for McSally did not respond to a request for comment.

Committee Chairman Mac Thornberry, R-Texas, said at the hearing that he wants to wait until the commission created by last year’s bill finished studying the issue.

“Again, the first question is, and I don’t know the answer, to tell you the truth, whether we continue to need Selective Service or not,” Thornberry said. “That’s what this commission is looking at. And if it decides we do, then it is looking at who should be drafted.”

It drew support from nearly all the committee’s Democrats along with six Republicans, passing 32-30.

But other Republicans put a stop to the momentum, using a procedural move to remove the amendment from the final bill.

Hunter said he never supported drafting of women. In a Fox News op-ed two weeks after the committee vote, he said he never planned to vote for his own proposal and introduced it to “force the conversation.”

“Let me be clear: I don’t support women in the infantry or special operations, nor do I support women registering for the draft,” Hunter wrote, arguing that integration would impact “military culture and mission effectiveness.”

“The fact is that every single military leader in this country, both men and women, members of the military uniformed leadership of this country believe that it’s simply fair since we’ve opened up all aspects of the military to women that they would be also registering for Selective Service,” Senate Armed Services Committee Chairman John McCain, R-Ariz., said on the Senate floor last year.

This year’s Senate defense bill does not contain a provision about women and the draft.

In a Senate hearing last year, Gen. Mark A. Milley, Army chief of staff, and Gen. Robert B. Neller, the Marine Corps commandant, both said they supported having women register for the draft.

A White House spokesperson did not respond to request for comment.

The exemption of women from the draft stems from a 1981 Supreme Court decision. The court ruled that the requirement that only men register was constitutional because, at the time, women could not serve in combat roles.

Lawrence Korb, a senior fellow at the Center for American Progress, a liberal think tank, served as assistant secretary of defense in the Reagan administration. The court’s ruling, he said, no longer makes sense after the Obama administration lifted the ban on women in combat.

“If a woman can do everything (in the military), why shouldn’t they be subject (to the draft)?” Korb said.

The National Coalition for Men, a nonprofit based in San Diego that aims to end gender discrimination, is suing the Selective Service based on that argument. They say either women should be required to register, or men shouldn’t have to.

In February 2016, the 9th Circuit Court of Appeals allowed the case to proceed after a lower court had dismissed it. Harry Crouch, the president of the NCFM, said there hasn’t been any movement since and he that believes the courts are “stalling” for Congress to act.

“Eventually, if Congress can’t make up its mind, the court’s going to be in a position to make a ruling,” he said.

“I think a lot of people have still not accepted the fact that women can do everything in the military,” he said.

A surprising number of men in Washington aren’t registering for the draft. That’s a felony.
Former Washington state lawmaker tapped to lead US Selective Service System

Will women have to register for the draft? Republicans say no. Selective service for everyone or none at all.